Any Given Sundae
(Australian Amateur Sleuth #5)
by Morgana Best

When quantum physics professor Roland is found dead in Sibyl’s house next to a half-eaten sundae, the detectives pin Sibyl as the prime suspect when evidence is found that implicates her! Along with Mr. Buttons, starts , Sibyl starts investigating to solve the murder and to find out who tried to frame her..

I love this series, always a light read and full of lively characters (Mr Buttons is in fine form in this one!) and great plots. As always, there’s some real laugh-out-loud moments, and as always, it’s usually Mr. Buttons, by far my most favorite character in this series (the false eyelashes had me rolling, as did the dinner Cressida and Sibyl “cooked”.) The ending was soooo satisfying and Mr. Buttons finally got his greatest wish! (heh heh)

Another great read in this series and another spot filled on my r/CozyMystery Book Bingo card.

I liked this one but for some reason, it didn’t hold my attention as much as the other ones did. Whether that’s due to my crumbling attention span (always a strong possiblity) or this book, I couldn’t tell you.

It had a great plot; a building Fenella inherited from Mona (who received it as a gift from Max) has been empty and seemingly forgotten ever since the candle company that used it closed down. While taking a look inside with her advocate Doncan, Fenella finds a mummified body in one of the offices. Is that why Max told Mona never to sell or rent it? Daniel is called in to help investigate while Fenella helps out behind the scenes.

I usually barrel through these books in an evening but this one just felt unfocused and I had a hard time keeping myself reading it. Maybe it needed some small side mystery to fill in the plot? Perhaps but I’m not an author, so I would’t know. But it felt like this just rambled along until the whole thing could be solved. Additionally, I have several unanswered questions about the plot in this one and maybe that’s why it took me longer than usual to finish it. I can’t really get into my questions without putting in spoilers, but I have to say the actions of a couple of the suspects were peculiar and I can’t figure out why they were doing (or trying to do) the things they did. And I’m also wondering, do cats usually get 3 meals a day? I haven’t had a cat in years but when I did, I just put fresh kibble in their dishes before I went to work.

Anyway, I did enjoy the book, and I did love the plot (and I always like hearing more about Mona and Max) but not as much as previous books. Still, can’t wait for the next one when they go to Buffalo!

I read this several years ago but apparently didn’t write a review. In fact, it’s been so long since I read it that it felt like I was reading it again for the first time but with full knowledge of the characters and their stories. Made for an interesting read! I suggested this for the r/CozyMystery May book club read after I decided to re-read the series before I get into the final book (I’ve been putting it off because I’m not ready to say goodbye to Battle Lake and Mira. *sob*)

I love Mira. I would want her to be my BFF if we lived in the same universe. She’s equal parts awkward, hilariously dark humored and a bit of an overthinker. Basically, she’s me as a fictional character. And I think that’s why I love this series so much, it’s not often I find someone who comes up with worse jokes in bad situations than I do. And now that I think about it, it’s all of the characters in this and all the books in the series that kept me coming back with each book. I know how the characters evolve as the series goes on, so it was a real treat to go back to where it started.

As for the plot, who killed archaeologist (and one time football star) Jeff and why? I loved the plot with all its twists and turns and Mira’s fumbling attempts to investigate made it all the more realistic. I loved all of the funny moments along the way, from that party (had me laughing out loud!) to breaking into places to trying to spy on someone’s conversation through a window, it was both comical and also…I mean, who wouldn’t think along the lines that Mira did? Who wouldn’t dress in black from head to toe to break into a house or sneak into a party? I probably would’ve done all of the things Mira did, which made it feel more authentic to me. And that creeptacular ending! Have to say, if you saw that coming, my hat is off to you. This was my second time reading it and I didn’t even remember that ending.

Overall, this was a deftly plotted and well written debut in this series and one I definitely recommend. 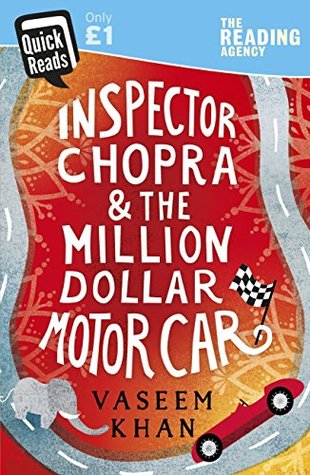 I needed an Indian author for one of the r/CozyMystery Book Bingo squares and someone suggested this one. It’s novella length, so I was able to read it in an hour or so, but for such a short book, it packed an entertaining plot. Set in Mumbai, India, Chopra is a police inspector who had to retire due to a heart issue but is unwilling to give up the job he loved, he opened a detective agency that runs out of the restaurant he owns. One morning he is visited by a car dealership employee asking Chopra to investigate the theft of a $4 million dollar Mercedes that the dealership procured and customized as a birthday present for the son of a local gangster . If the car isn’t found in time to be presented to the gangster’s son, there will be trouble.

Despite being just over a hundred pages, this was well plotted and entertaining and it was easy to fall into the book. Chopra is a pragmatic sort of investigator and I loved that he has a baby elephant as a sidekick (that car wash had me giggling!) As other reviewers have said, it wasn’t difficult to figure out how the car was stolen, but the culprit turned out to be a surprise. While it was a bare-bones investigation, it was interesting to see how Chopra tracked down every clue and I loved “seeing” the sights and sounds of Mumbai.

I picked this one up for the r/CozyMystery Discord book club read for April. And, as a chronic procrastinator, I waited until the last days of April to read and review it. That’s how I roll.

In a nutshell, Astrid runs off from the home she shares with her doctor husband after catching him in bed with one of her colleagues. She joins up with her friend Sam, a photographer who is working on a coffee table book of hidden tourist gems in Europe and the last chapter involves taking a week long Orient Express style train trip along the coast of Spain. The morning after boarding, Astrid and her friends discover a murdered man, become suspects and must work fast to find a murderer.

But there were issues that I chalk up to a writer with a lot of good ideas, but without a lot of writing experience. And that’s fine, everyone has to start somewhere. The main issues I had is that the MC, Astrid, didn’t sound like a woman who has experience as a jet setting career woman, she sounded much younger, like early 20s younger. Astrid is also from England and yet the tone of the book sounded very American. And that’s fine, because I’d be more annoyed if the tone stayed the same and the author just sprinkled a few Britishisms like “Quite right!” or “I’ll just have a spot of tea” as if mentioning tea is enough to make a book sound more British. I’m not sure about where the author is from (not that it matters) but if she is English, I’d expect it to sound more English-y (Yes, I said English-y, you know what I mean) The plot was also simple and formulaic, and I think if some things were researched a bit further and the book edited to tighten up the plot, this would be a 5 star book. An example, after they found the body of the victim, the train’s security chief told Astrid and her friends to “go back to one suite until they could be questioned” and although I’m not in law enforcement or the legal profession, my thought is that if they were, in fact, legitimate suspects, they wouldn’t be left unaccompanied to wander back to their suite and hang around cooking up a story and hiding evidence. Then again, perhaps that was a clue? Hmmmm. Now I’m rethinking that assessment.

Overall, I’ll give this one 3 1/2 stars because I did enjoy it, at around 150 page, it was perfect for an evening read and despite the issues, I will probably pick up other books in the series, particularly if the writing and the characters progress.