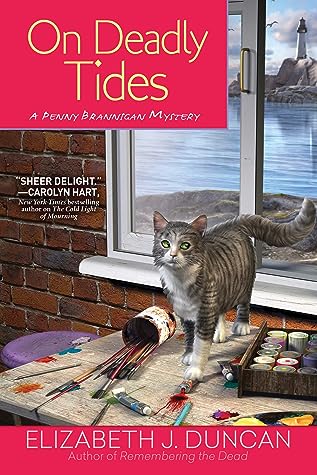 Penny and fellow painter friend Alwynne take a weekend course on painting in the nearby town of Beaumaris on the beautiful North Wales island of Anglesey. Sitting in a crowded bar on her first night, Penny first meets Colin, an attractive man, and a young news reporter named Jessica who just arrived from New Zealand to investigate a man who went missing several years before. The next morning, while out to paint a lighthouse, Penny finds Jessica dead on the beach, the victim of an apparent fall. Penny knows this was no accident and when the police have no evidence it was anything but an accident, she picks up the threads to unravel the circumstances that led to the young woman’s death.

Found this on Netgalley and snapped it up. I’ve read this series since the beginning and a few books back, I mentioned that I thought the character of Penny had stagnated, so I was really happy to see her character moving forward! I think this will breathe some new life into the series.

As for the plot, I had a pretty good idea whodunit but eagerly raced through the book to see it all unfold. Lots of twists and turns led to a satisfying conclusion that neatly wrapped up the two cases. It was also a pleasure to watch the romance blossom and to catch up with the usual cast of characters I’ve grown to love. The sweet ending left a smile on my face and I do hope this isn’t the end to the series (felt a little ambiguous to say for certain?) and if not, I look forward to more of Penny’s exploits.