Mums and Mayhem (A Magic Garden Mystery #3)  by Amanda Flower 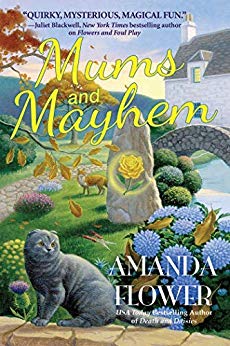 When I saw this as a Read Now on Netgalley, I eagerly snatched it up! In Mums and Mayhem, Fi has her hands full. Not only is she helping out with a homecoming concert put on by a superstar musician to the small village of Bellewick, but her parents are also in town to visit (and to guilt the girls into returning to run the family farm) and to cap it all off, someone killed the magic garden she’s been tasked with keeping!

I really enjoyed the main mystery, who killed superstar fiddler Barley. Plenty of people were angry with Barley but who was angry enough to kill him? Fingers were pointed all in all directions and even Fiona’s father is a suspect! In the end, the true killer was a surprise and the exciting ending made for a real page turner.

But it was the magic garden was what sucked me into this series from the beginning; I’ve been under the spell of magic gardens ever since I read The Secret Garden at the age of 9. It was with a sense of dread when Fiona discovered the garden dying. How could this happen? Who would do such a thing? It wasn’t hard to figure out, but the why was was a head scratcher and I wondered why Fiona hadn’t noticed the tell tale clue. The reasons for the vandalism were unnecessary. Although there was no legal recourse, I would’ve asked a few of the old salty dogs at the shipyard to handle the situation for me.

It was good to see Fiona and her parents settle a few issues and come to an understanding. But I have to say, Isla is an annoying woman who acts like a bratty 8 year old and the more annoying she gets, the more Fiona (and her parents) seem to shrug it off. I don’t get it. Go home, Isla. Marry a farmer. Go be a problem somewhere else.

Overall, a solid mystery and a very enjoyable read