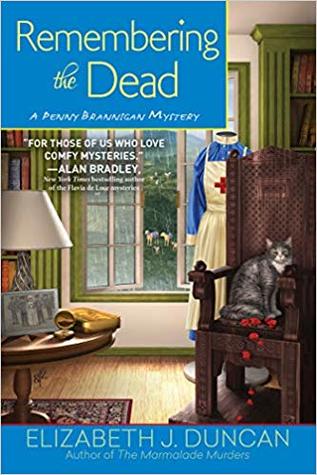 I’ve read this series since the beginning and I love how the world of Llanelen and the characters have grown and expanded as the series progressed. In this one, Penny is tasked with preparing an elegant old fashioned dinner party at the local estate, featuring a historic artifact – The Black Chair, an honorary award given to celebrated bards; this one was given to a poet who died in WWI and was posthumously awarded the chair. After being refurbished, it is set to become the feature attraction at a local museum, but not before being unveiled at the dinner party. The dinner party mostly goes off without a hitch until a waiter goes missing and is later found dead -and the chair is missing! Penny sets off to find out who killed the young man and to find the missing historic piece.

Penny is quite involved with this one, even to go so far as to take the ferry to Ireland to track down a suspect. She also has to deal with a caravan of gypsies who set up camp in a field next to her house, the re-appearance of Gareth, who is in town to settle some affairs, and several other small problems that crop up. I enjoyed watching Penny slowly untangle all the threads to expose a killer and a thief, and I love catching up with the villagers in the tiny Welsh town.

Always a good read, this is another excellent addition to the Penny Brannigan series.