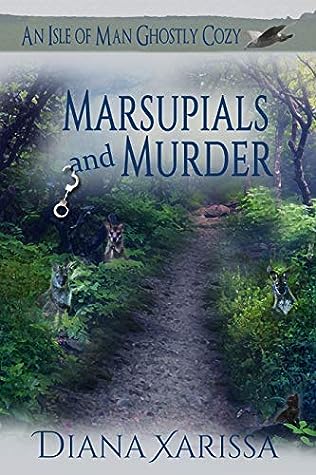 Poor Fenella is feeling the burden of the millions of dollars she inherited resting on her shoulders. A year after she moved to the Isle of Man after her aunt died, charities on the island have begun their incessant requests for money. One such charity, run by Darrell Higgins monitors the local Wallaby population. Thinking Fenella will donate rather than volunteer, Higgins is surprised when Fenella signs up to take an hour on the next hunt.

The day of the hunt dawns cold and rainy and Fenella, along with police inspector Daniel, huddle in a wet field for their hour long shift before heading back to their car, but not before discovering Darrell dead, yeeted under a bush.

This was one of those books that had a boatload of suspects but it was apparent (to me anyway) who the culprit was, but that didn’t diminish my enjoyment one bit. Darrell’s ex-wives were a hoot, I’d love to spend an hour at the Tale & Tail listening to them. As always, the usual gang was there, Shelly immersed in writing her romance novel,  Mona the ghost, Katie the kitten’s antics and even the dogs make a quick appearance. Always a good time to catch up with all of them. I thought for sure that Fenella was finally going to move forward with her romance with Daniel but it’s becoming less of a tease and more of a chore with those two.

Overall, another enjoyable time on the Isle of Man and looking forward to the next book!