Hospitality and Homicide by Lynn Cahoon

I sat down last night to read for an hour or 2 until my favorite show came on and missed my show! (Thank goodness for DVRs!) There were two riveting plots in this one, B&B innkeeper Walter is found dead, murdered in a way that closely mirrored the plot of visiting crime author Nathan Pike’s new novel and a child missing after being swept off the beach by a wave. Esmeralda claims he’s still alive but in peril and won’t survive much longer. I was totally roped in by this story line, Esmeralda was definitely the unsung hero of this book! I loved seeing more of her (she’s always been one of my favorite characters!) The storyline about Walter’s murder was baffling and I loved the surprise twist at the end. Throw in relationship issues, Economics finals, broken hearts, hot coffee and a slice of cheesecake and you’ve got a riveting cozy mystery to wrap yourself up in.

I’ve read this series from the beginning, I’ve always felt is was more than just a cozy mystery series, it’s also a community; one that you stop and visit often to catch up with the characters. I love that the story lines progress naturally and there’s always new people to meet and love. I know Deek will be a great addition to the CBM family and what was the deal with Nathan? Multiple personalities? That’s a plot unto itself!

Overall, another excellent chapter in the Tourist Trap series and ranks up there as the best of the series. Definitely a must read for any cozy mystery fan! 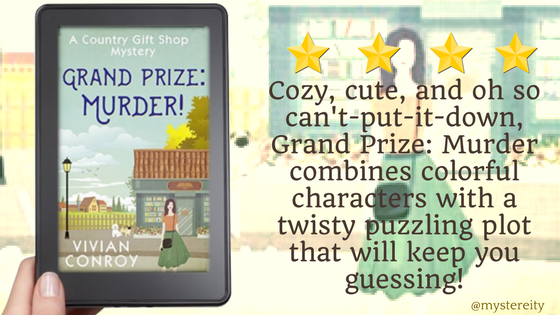 Vicky Simmons is back in Grand Prize Murder, the second book in the Country Gift Shop series. Author Bella Brookes has come to Glen Cove on a book tour to kick off a scavenger hunt to publicize her newest novel. When a man is found murdered next to an item linked to Bella, Vicky is certain that Bella is being framed and starts her own investigation. Hampered by a reporter with an agenda and trying to keep her promise to Cash to stay out of his investigations, Vicky sets out to unravel tightly held secrets to find a killer.

Light and entertaining, Grand Prize Murder combines colorful characters with a twisty, puzzling plot that kept me glued to the book. This is the second book in the Country Gift Shop series (can be read as a standalone, but I definitely recommend reading the first one in this series!) and I loved returning to Glen Cove and Vicky’s adorable gift shop. What really sets this apart from other cozies is that the clues are little teasers that pulled me in and kept me reading. I would’ve loved it if the scavenger hunt was a bigger part of the story, it would’ve been a great way to introduce more of Glen Cove, giving me a better sense of the place. I liked that Bella was herself a cozy mystery author, sort of like a truth-meets-fiction moment, and I loved how how the scavenger plot was a cozy mystery within a cozy mystery. Cute! And I loved the little plot twist at the end of the book, it really capped off a great mystery.

Overall, a great mystery and a cute little series and highly recommended for cozy mystery fans. 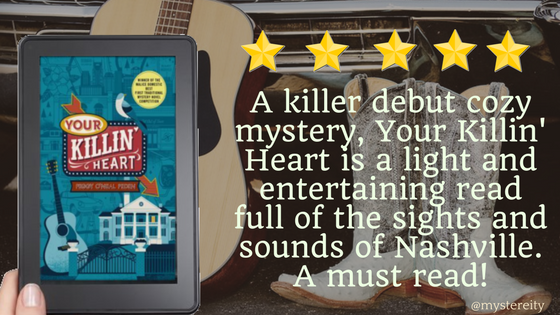 Campbell Hall, a travel agent in Nashville, TN, grew up surrounded by the history of country music. When her boyfriend, Doug Elliot, has to pick up a few paintings at the estate of Jake Miller, a long dead country music legend who died young, Campbell begs to tag along, hoping to catch a glimpse inside the opulent mansion still occupied by Jake’s widow, Hazel. When she’s left alone for a moment, Campbell can’t help but take a look around and peeks into what turns out to be Hazel’s bedroom, with Hazel seemingly asleep in the bed. When it is reported that night that Hazel was found dead and is later determined to have been murdered, Campbell is compelled to investigate. Uncovering long held secrets and pursued by a killer, Campbell risks it all to find justice.

I loved this! The first in a new series, I already know I’ll keep coming back for more. Besides the great plot, the characters were likable and realistic, especially Campbell, she’s my kinda gal. Self-described as “a little too honest” she’s impulsive, inquisitive, and a little bit socially awkward – in other words, me in a nutshell. Even the setting was a character in itself, with tidbits about the music, the history and the culture of Nashville, TN. It was so vivid, it felt like I was really there.

I really enjoyed the plot, lots of good suspects and lots of suspects you don’t realize are suspects and suspects you suspect but aren’t actually suspects. Lots of plot twists and red herrings kept me guessing and the thrilling ending left me satisfied. The story left a few plot points open to be explored in later books and I’m eagerly awaiting the next in the series.

A light, entertaining cozy mystery that will keep you guessing, Your Killin’ Heart is a fantastic start to a new series and a must read for any cozy mystery fan.

The unthinkable has happened; time has run out, the missiles have been launched and the United States as we know it is doomed. But never fear! The government has planned extensively to assure their safety and that their reign will continue without interruption – even if there’s nothing left to govern after it’s all over!

Raven Rock explores the history of the people and events that brought about these plans, spanning the span of time since the end of World War II, from Truman to Obama (who signed a bill in 2009 giving the US Postal Service the sole responsibility of delivering “biological counter-measures” in the event of a biological weapons attack. Which is better than FedEx (who always seems to deliver my packages late, but that’s another story.)

After I watched a Travel Channel show that talked about The Greenbriar, I picked up Raven Rock to read more about the history behind that Cold War bunker mentality and found much, much more. The easy flow of the book drew me in quickly, the anecdotes and trivia kept things light and interesting and the very linear layout stayed on topic without extraneous detail to confuse the reader.

Raven Rock is an engrossing history illuminating a shadowy aspect of the government not well known or understood and I definitely recommend it to history buffs and trivia fans alike. 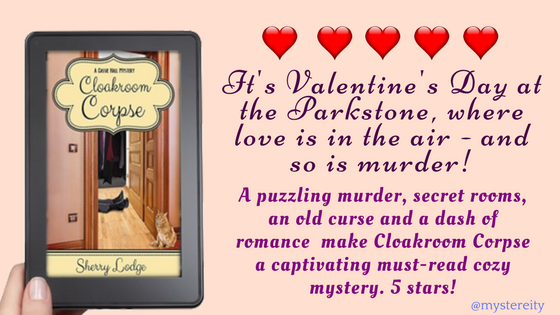 Cassie Hall and her peep-toe shoes have stepped into another mystery at The Parkstone, the luxury apartment building where she works as the night shift concierge. While checking her mail, she overhears Mason, the day shift concierge, having a heated argument with someone in the lobby. Moments later, Cassie finds Mason in the cloakroom, stabbed with a letter opener. As a prime suspect, and with Mason’s grieving girlfriend to look after, Cassie finds herself on yet another case, despite her police detective boyfriend Eric’s disapproval.

First of all, stick hidden/secret rooms in a book and you’ve captured my attention. Add in a mysterious curse and I’m hooked. I could happily spend an afternoon in a secret room, exploring all the nooks and crannies but since I don’t have any secret rooms, the next best thing is to spend an afternoon reading about someone exploring secret rooms. This looks like it will continue in later books, and I’m looking forward to reading more about The Parkstone and its secrets.

I really enjoyed the great plot, who murdered Mason and why? One by one, all the secrets Mason has been hiding are dragged out, bringing a new suspect. It seems like all of The Parkstone resident have something to hide! Now I’m wondering what Mr. Gilrot’s dirty little secrets are….hopefully in the next book? And Mrs. Canterbury! You know she’s got more than one skeleton in her closet.

And, of course, it wouldn’t be Valentine’s Day without a little romance, and the sweet ending capped off a great mystery.

Cloakroom Corpse is a great addition to the charming Cassie Hall Mystery series, and definitely a must read for any cozy mystery lover.