Cassie Hall, a concierge at the exclusive Parkstone luxury apartment building in Bethesda, MD, is thrilled when golf superstar Kip Ace and his wife, Bunny move into the building. Not long after, Cassie finds Kip in the Parkstone’s Crabapple Courtyard – dead! With The Parkstone in a 24 hour lockdown while police investigate, restless residents and her job on the line, Cassie sets out to find a killer

I really enjoyed this charming cozy, it was a great weekend read. With a fast-paced plot full of misdirection that had me glued to the book, it was one of those great stories where you change your idea of whodunit with each chapter. With likable characters and a comfortable atmosphere, it was easy to get locked into The Parkstone with all the other residents. I got a real kick out of Mrs. Canterbury, and Cassie is an engaging main character, determined, stubborn and resourceful. I liked that the characters had enough of an introduction to give you a good idea of who they are, but leaving a few questions to be (hopefully) answered in later books.

The Courtyard Corpse is a great start to a new series, and definitely one I’ll keep on my watch list. Cozy mystery fans will find a great new world to enjoy at The Parkstone, and a perfect weekend read.

New release!  Purr M for Murder is a fantastic start to a new series and will appeal to cat fanatics and cozy mystery fans looking to curl up with a purr-fectly charming tale.

Sydney and her sister Kat run Friendly Paws, an animal shelter in Deer Park, North Carolina. The shelter has run into financial difficulties, so Sydney and Kat team up with a local coffee shop to host a Cat Cafe, all to benefit the shelter and to get some of the cats adopted. The only problem is that one of the townspeople, an influential property owner named Trowbridge Littleton, is determined to shut the Cat Cafe and the animal shelter down. Determined to change his mind, Sydney and Kat show up at his shop and discover him dead on the floor. Under suspicion and intent on saving the animal shelter from being closed, the sisters team up to find a killer.

Read my full review or better yet, pick up the book at your local book retailer or online at Amazon   |  Barnes & Noble

An outstanding mystery with a fresh, original plot that drew me in and kept me turning pages. There’s no stumbling over a dead body here; instead, a cold case is poured over and debated. It was almost Agatha Christie-ish, simple, yet complex in a locked room setting.

Read my full review or better yet, head to your nearest book retailer to pick up a copy or buy online at   Amazon  |  Barnes & Noble

Happy Release Day, Sarah Fox!  For Whom the Bread Rolls is now available!

The great plot and steady pace kept me guessing, and that surprise ending crêpe’d up on me and it was over almost too fast. The plot was tricky with lots of misdirection to keep things interesting, and there was muffin that diminished how much I enjoyed this book.

All of these puns are bacon me hungry!

Read my full review here or better yet, pick up your copy today at your local book retailer or onliine at Amazon | Barnes & Noble 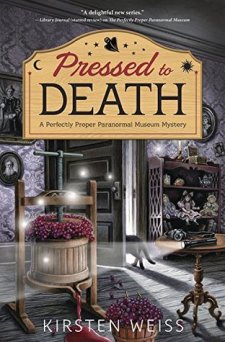 Maddie has just bought a haunted grape press for her Paranormal Museum when she’s accused of stealing it by a vintner that Maddie later finds dead. Coerced into investigating by her mother, Maddie puts catching a killer at the top of her to-do list, along with staging a room at a Halloween haunted house and hosting a Death Cafe at the Paranormal Museum.

I liked this, but I was a little disappointed. At the heart of this book is a good premise and an intriguing plot. The current day murders had a lot of twists and turns, and the story behind the haunted grape press (and everyone’s reaction to it) was entertaining. I loved Maddie’s room at the Haunted House (actually, I would’ve loved to see the whole thing!) and the descriptions of the custom Oujia boards she sells made me want to go out and buy one. As for Adele’s new descriptions of her teas, I thought they were colorful and a bit corny, but pornographic? Nope. Harper needs to get out more.

Unfortunately, the murders weren’t the focus of the book; the plots were largely buried under the weight of Maddie’s love life, the town placing bets on whether Maddie will solve the crime, the Ladies Aid anarchy, the Death Cafe, and the terrifically annoying Detective Hammer whose purpose seems only to be a distraction and is a negative stereotype that makes police look bad (as if they need any more of that. I’m seeing this more and more in books and it infuriates me.  I doubt it’s the author’s intent to vilify the police, but it’s entirely unwelcome.  It’s such a cliche to have a bitchy woman character that hates the MC, and it’s implausible that such an immature, hostile and rude person would stay on the force long enough to become a detective. Ugh. Can we stop this, please? )

I just feel like it was all too much…stuff that was crammed into the book, and the plots suffered for it, especially the haunted grape press story line, it just sort of petered out with a barely-there resolution.

Overall, this is a very cute and enjoyable series (and I still love the idea of a paranormal museum!) and this book was a good read but it would’ve been so much better if the focus was more on the mystery and less on all the other silliness.

Thank you to Midnight Ink and Netgalley, who provided an advanced copy in return for my honest review.