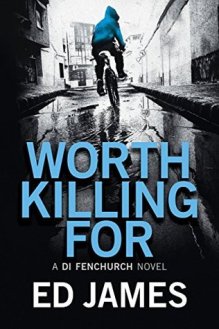 Worth Killing For by Ed James

A gritty, hard-boiled story about gangs, crime and murder on the streets of London, Worth Killing For isn’t your ordinary police procedural, it’s a look at the seedy side of city life that lives and breathes every day, but most of us don’t notice until it impacts our own lives.

DI Simon Fenchurch witnesses a fatal stabbing of a young woman on the street in London and chases down the suspect, a young boy on a bicycle. After apprehending him, a number of cellphones are found, indicating the boy is a cellphone thief known as an “Apple Picker”. After evidence turns up that exonerates the suspect, Fenchurch is forced to set him free. As he investigates further, he uncovers a sophisticated petty crime ring led by an elusive figure named Kamal that appears to be branching out into violent crime. But who is Kamal working for?

Just a few pages into the book, you’re already in the midst of the action and it doesn’t let up until the end of the book. I enjoyed the complex plot, there were many layers to the story that peeled off little by little right up to the shocking conclusion. A lot of hot social topics in today’s society are neatly knitted into the story, such as racial tension, gangs and crime, making the book so realistic that you feel like you’re right there on the street.

Overall, an enjoyable read from one of my favorite authors and this series is shaping up to be a blockbuster. I would say that this book can be read as a standalone, but to fully understand the characters, they should be read in order.

Worth Killing For will be released on October 11, 2016 and will be available at book retailers or on Amazon

Thank you to Thomas & Mercer and Netgalley, who provided an advance copy of the book in exchange for an honest review.

3 thoughts on “Review: Worth Killing For”