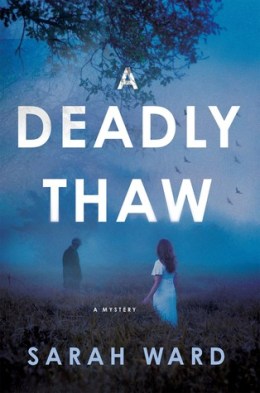 A Deadly Thaw by Sarah Ward

If you read only one book this year, A Deadly Thaw should be it.  A tense thrill ride through twisted justice and family secrets, it will keep you on the edge of your seat and leave you breathless.

Lena Grey was convicted 14 years ago of killing her husband, Andrew.  Not long after she is released from prison, a man is found shot to death in an abandoned morgue and is positively identified as Andrew.  If he wasn’t killed 14 years ago, who did Lena kill and why?

I loved this from the first page; I don’t think I’ve ever read a more delightfully labyrinthine plot. I think the most compelling aspect of the book was that you’re just as in the dark about Lena as are the police and Lena’s sister, Kat.  You’re not given any clues, so every revelation is just as shocking to you as it is to the characters.  I admit, I had an inkling what was behind Lena’s behavior change as a teen, but had no idea how it played into the later events. But the book was in no way confusing, it unraveled layer by layer, amping up the tension which each page.  The shocking conclusion was heart-stopping and wholly satisfying and left me wanting more.

Besides the suspenseful plot, the characters really make this a memorable book.  Sadler and his team are realistic and believable, and Kat was believable and realistic as a baffled sister trying to unravel Lena’s clues. It was very easy to relate to Kat’s bafflement to her sister’s actions, and her frustration while trying to figure out the clues Lena was sending to her.  I really thought Mark was an interesting character; he went from one of Kat’s therapy clients to the sensible and pragmatic shoulder for Kat to rely on.  While it wasn’t possible within the book to expand his character, I could easily see him and his fellow ex-soldiers carrying a book of their own.

Overall, A Deadly Thaw is a riveting and compelling book that will thrill lovers of action-packed mysteries.  This is the second book in the Inspector Francis Sadler series, but it can easily be read as a standalone.

Thank you to St. Martin’s Press, Minotaur Books and Netgalley for providing an advanced copy in return for my honest review.

A Deadly Thaw is available at book retailers, on  Amazon or Barnes & Noble.

5 thoughts on “Review: A Deadly Thaw”