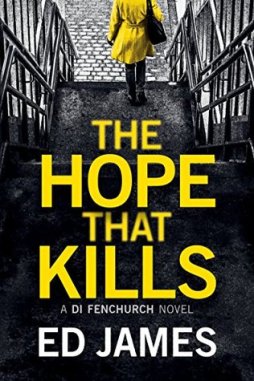 The Hope that Kills (DI  Fenchurch #1)  by Ed James

Fast-paced and heart-stopping, The Hope That Kills is a chilling look into the dark side of human trafficking and a thriving sex trade industry.

When two young prostitutes are found dead, with no ID and seemingly no official identities, DI Simon Fenchurch, driven by the disappearance of his daughter 8 years ago, relentlessly pursues every lead through London’s seedy underground sex trade, looking not only for a killer but also clues to his daughter’s whereabouts. What Fenchurch uncovers is a horrifying morass of corruption, human trafficking and exploitation.

I’ve been a long time fan of Ed James’s books and I’ve been looking forward to reading this one. So, when I started this book, I expected an exciting and compelling story, and I wasn’t disappointed.  The thrilling plot draws you in quickly, and the non-stop action keeps the pace moving swiftly right up to the exciting conclusion. The only thing that bothered me is that the armed support unit apparently doesn’t see the need to surround a house to prevent a suspect from running out the back door.  Shouldn’t that be SOP?

Simon makes a great main character, dedicated and intuitive.  While the use of a flawed hero may not be a new idea, Simon’s pain is very real and humanizes him; who can’t relate to a grieving father, living with the pain of losing his only child?  The use of drums was, I thought, a powerful metaphor for the rhythm of life, but were Simon’s drums the unconscious recognition of his daughter’s heartbeat, or just the remembrance of each moment without his daughter? Either that or he has dangerously high blood pressure.  You decide.

This was the first of James’s books set in London (the rest are set in Edinburgh) and although vividly drawn, I just didn’t connect with it as well as the Edinburgh setting. I’m not sure I have a real reason for that, except that it’s my perception that as a giant mega-city, London just doesn’t have the same character as Edinburgh.

Overall, an exceptional start to a new series from an already great author, and recommended fans of Brit crime or gritty police procedurals.

The Hope That Kills is available at book retailers, or on Amazon and Barnes & Noble