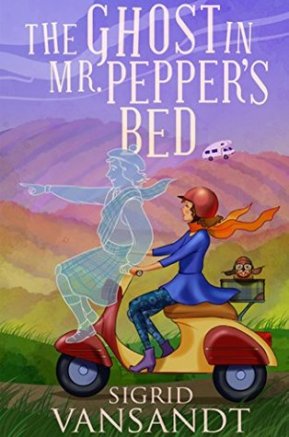 The Ghost in Mr. Pepper’s Bed by Sigrid Vansandt

Sonya Curuthers is a medium who specializes in ghost therapy (in other words, seances). Early one morning at the Whispering Pines RV Park, Mr. Pepper wakes to a ghostly woman snuggling up to him and the resulting kerfuffle between the ghost of his dead wife and the spooning specter  sends him running to the woman in charge of the RV park, who calls Sonya for help. When bones are discovered in a pit soon after, Sonya (along with her wee terrier and the ghost of a 19th century Scottish laird) has to use all of her expertise to find a murderer.

First in a new series,  I picked up The Ghost in Mr. Pepper’s Bed on a whim. The title was just irresistible to me, I had to know just who Mr. Pepper was,  why there was a ghost in Mr. Pepper’s bed, and, of course, why there was a Scottish ghost riding on the front of a scooter.  Was he the ghost in Mr. Pepper’s bed?  Now you see why I had to read it.  I dived in and discovered a great mystery, with quirky, likable characters, loads of southern charm, and a well-paced rich plot that will tug at your heartstrings.   I appreciated the small town Missouri setting,  the vivid descriptions of the homes and the locations reminded me of the small town where I grew up.  I loved the dog gossip network and how they relayed their information.  I didn’t understand the point of the story line with the kid on the skateboard, though.   The murder didn’t have a whole lot of suspects, but the satisfying conclusion made it worth finishing.

Overall, a fantastic book that sucked me in from the very first page and definitely one of my favorites I’ve read so far this year.  Very memorable and enjoyable and I hope to see more of Sonya very soon.

The Ghost in Mr. Pepper’s Bed is available on Kindle from Amazon