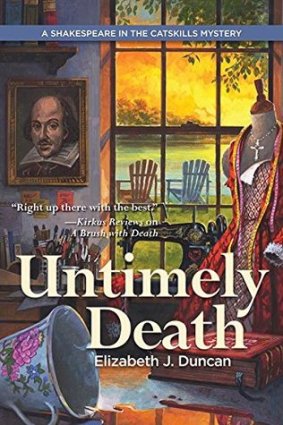 Untimely Death: A Shakespeare in the Catskills Mystery by Elizabeth J. Duncan

I had  trouble getting through this one.

I think a big part of the issue for me is, having read the author’s other series, The Penny Brannigan series, I expected a solid read. It’s not like this is the first time the author has written a mystery, so I was more than a little disgruntled with how shoddy this book was. Perhaps it’s an unfair to compare it to the other series, but it’s so well written, I can’t help but wonder what went wrong with this.

The plot was okay, but barely. It was largely buried in a lot of filler that I’m guessing was meant to add dimension to the story, but it didn’t. The characters were not very easy to relate to and one-dimensional. The main character and a few of the other characters were English but spoke as if they were poorly trained actors putting on an English accent.

Overall, I’m very disappointed with this. Perhaps someone who is unfamiliar with the Penny Brannigan series would enjoy it, but I won’t recommend it.

Untimely Death is available at bookstores or on Amazon